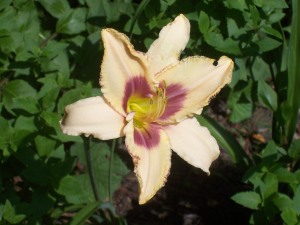 As a child, I remember seeing orange daylilies everywhere.  Yard after yard was filled with their stalks and their orange gift at the end.  After the bloom, it was nothing but blades of foliage.  In my mind, they were ordinary.

About 17 years ago, I happened to be watching Martha Stewart’s original television show and on it, she profiled Sydney Eddison.  My memory of that segment is of the two women — Martha 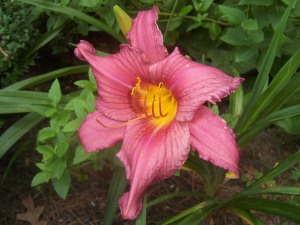 towering above the older Ms. Eddison — walking through the guest’s daylily border.  I believe the segment was timed quite nicely with a daylily spread in Martha’s magazine.  I remember being stunned by the variety of color, heights, and bloom times.  These were not  your grandmother’s daylilies.  I was sold.

Next, I had to sell Joe on the idea.  Like me, he also remembered daylilies as flowers and then grass-like foliage.  Nothing much to look at after the blooms have gone.  But I knew better.  I study the catalogs.  I see what the

Bela Lugosi takes a bite out of the front bed.

And each time, my eyes are drawn to the flower — so I began to place one or two in various parts of the garden.  Along the front path, they provide mid-season color after the spring flowers are done and the fall flowers are just a thought.  In the bed along the sidewalk, they stand at attention and put on a colorful streetside show.

Now we both agree that despite the foliage, the flowers are tremendous and colorful and reliable.  As I write this post, I’m looking out of my

Mid-season color in the front border.

backdoor to the other side of the pool.  There is a strip of dirt that blazes in the sun.  For years, I have planted zinnia, sunflowers, and gomphrena there.  It’s practically begging me to plant something more permanent and I’m imagining a border of daylilies in shades of red, a mixture of singles and doubles and some rebloomers.

I may not be a Sydney Eddison — but daylilies toyed with her, and she’s done okay.  There’s even a cultivar named in her honor.  Someday, if I toy enough with my daylilies, there could be a whole garden of reblooming Kevins.  All it takes is a dream, and as Debbie Harry and Blondie sang, “Dreaming is free.” 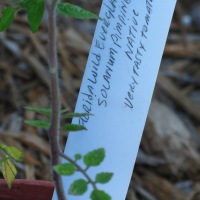