If you should ever find yourself visiting Brooklyn, do yourselves a favor and walk — down boutique and café-lined avenues, tree-shaded streets and, by all means, across one of New York City’s most beloved landmarks, the Brooklyn Bridge.  The bridge, which links the boroughs of Manhattan and Brooklyn for walkers, bikers and drivers, was, at its opening in 1883, the world’s longest suspension bridge.  Its location provides visitors with spectacular views of the NY skyline.

Looking from the bridge toward downtown Manhattan. The buildings under construction (just behind the cables) are part of the World Trade Center site. The one on the right (with two cranes on top in a V-shape) is the Freedom Tower.

While there are many people who jog and bike across the bridge, I prefer a slow stroll along the pedestrian promenade.

Visitors insist on leaving their mark. Rather than vandalizing the bridge, they now lock their messages to the bridge.

As you face Manhattan and look right, you can get a view of the Empire State Building.

Look left, and it’s the Statue of Liberty.

Arriving on the Brooklyn side of the bridge, you will be in Brooklyn Heights.  Here is a chance to wander off the main thoroughfare and get lost among the smaller streets and their dazzling show of window boxes.

When it comes to planting in pots or window boxes, I tend to keep the same plant in its own pot – and then group the various pots.  I never mix and match in the same pot – more out of a lack of confidence and fear that I will end up with a mismatched jungle.  Yes, window box planting is a skill of which I am truly in awe, and I am completely surprised by the variety that these Brooklynites have on display. 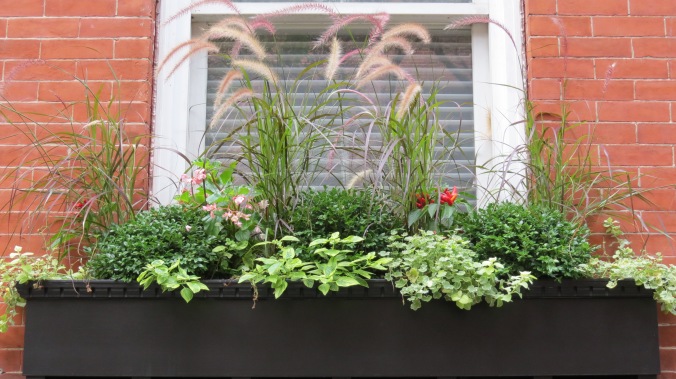 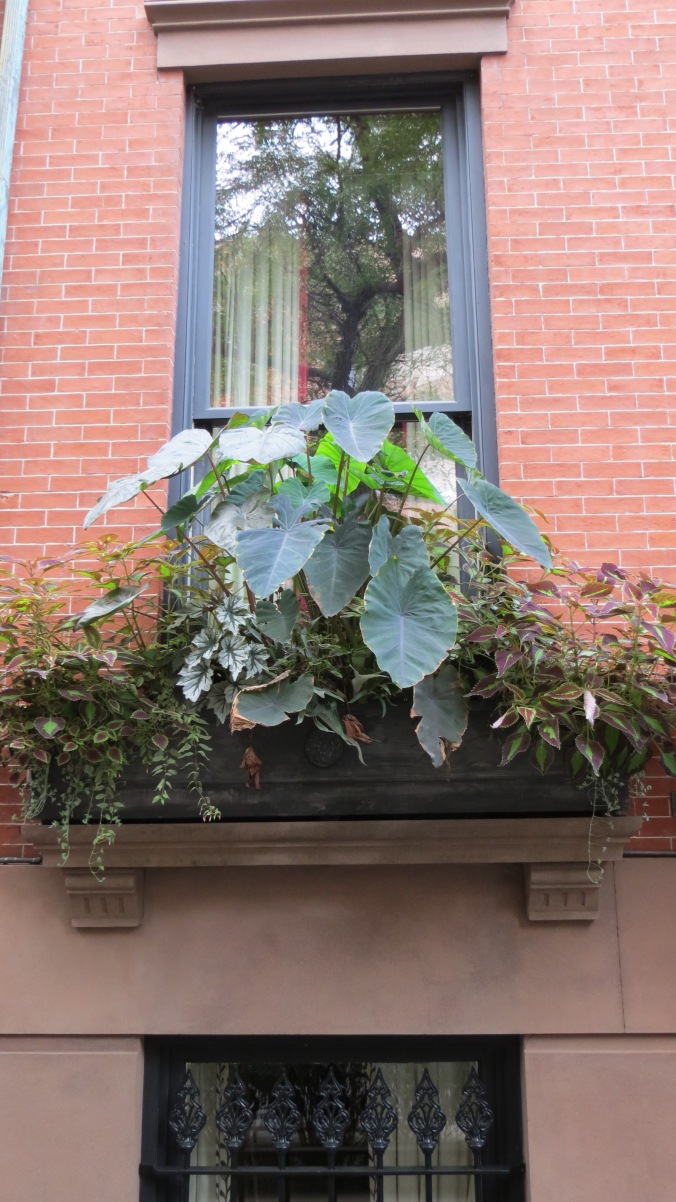 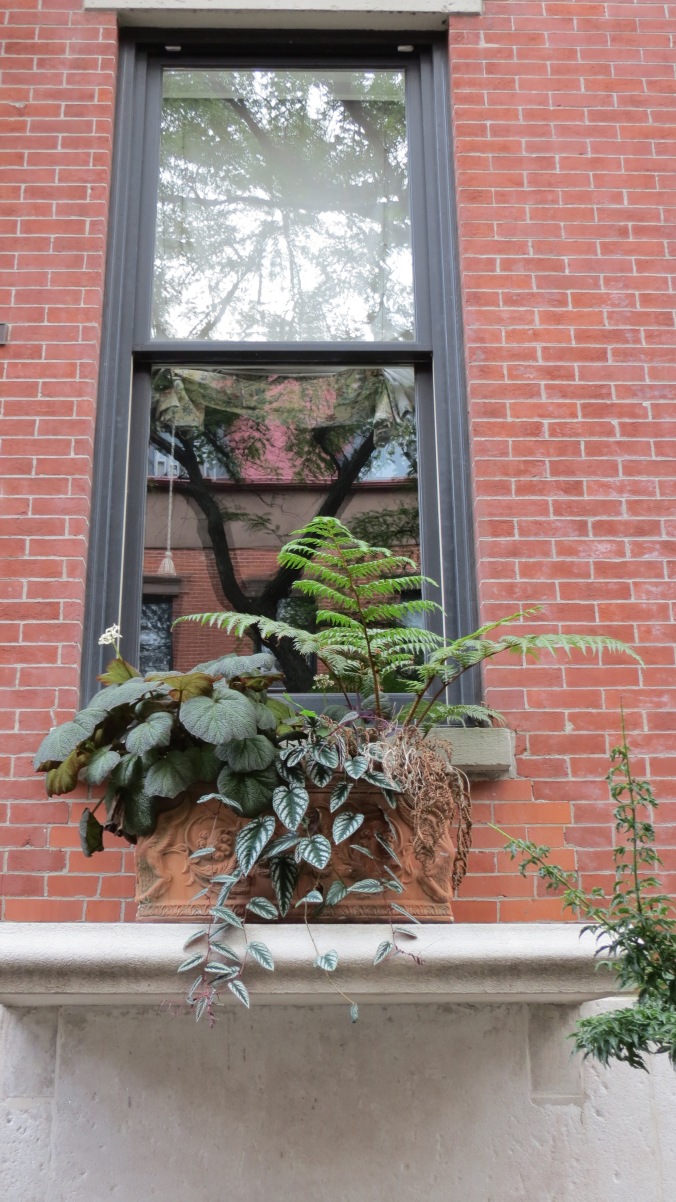 And an entrance that takes my breath away.

Clearly, all of this walking burns a lot of calories — but this is Brooklyn, one of the best boroughs in which to replenish those calories.  Although I didn’t take photos of our food, here is what and where Joe and I ate.

Lunch: Totonno’s in Coney Island for some thin-crusted pizza.  It’s a small place and certainly not fancy — but it is one of the pizza parlors that is always touted as the best among pizza afficionados.  You cannot order by the slice, so Joe and I ate a small pie — that’s four slices each and that kept us quite full.

Dinner: Still full from lunch, we opted for a small bite at Dellarocco’s in Brooklyn Heights.  An order of meatballs was perfect — but the tables around us were overflowing with pizzas and calzones.  Delicious!

Dessert:  Yes, there is always room for dessert — so we returned to Joe’s childhood neighborhood for some spumoni, which is an Italian ice cream, at L&B Spumoni Gardens.  YUM!

Yes, this was definitely a day worthy of an all-capital YUM.

There is nothing quite like humidity in New York.  With its density and weight, it has a presence – and it likes to make its presence known, often making the blacktop-enhanced summertime heat seem that much more oppressive.

And that kind of weather is perfect for a car-subway-walk field trip.  The idea was inspired by a recent article in the New York Times which focused on the Greenwood Heights neighborhood of Brooklyn, and its historic cemetery.

Situated on 478 acres, Green-Wood Cemetery was founded in the 1830s and is now the final resting place for more than 550,000 souls: politicians, soldiers, actors, dancers, freed slaves, designers, and journalists among them.  At one point in the 1850s, the cemetery, with path after path named after plants, even rivaled Niagara Falls as a tourist destination.

On this very hot and very humid day, there are few visitors approaching the ornate gateway.  The sedum in the iron birdbath seems to enjoy the heat, but the big-leafed coleus is much more content in the shade of the enormous archway. 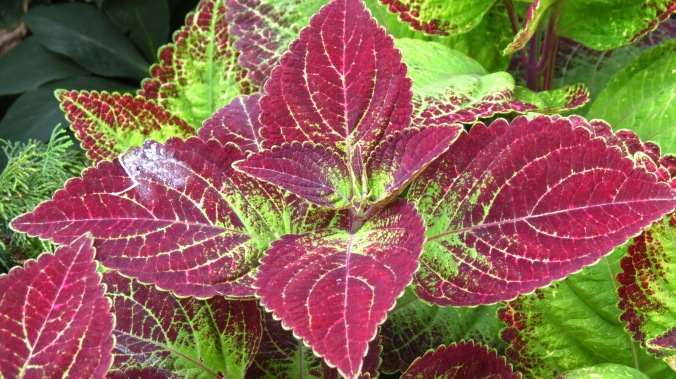 The only noise is the squawks from above.  The bird call sounds familiar but out of place in Brooklyn – but there, nesting in the center spire of the gate, is a flock of parrots. 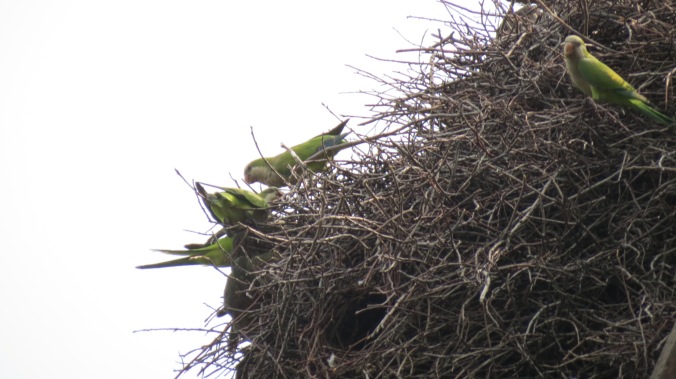 Just across from the cemetery’s main entrance are the remains of a wood-and-glass greenhouse. 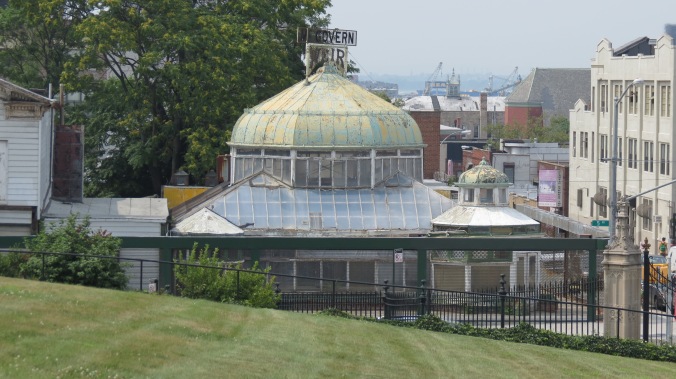 The greenhouse once belonged to James Weir, Jr., who had also built more than 20 other greenhouses and nurseries throughout Brooklyn.  In 1971, the McGovern family, also in the florist industry, bought the property.

Over the decades, the greenhouse, now considered a landmark as the only Victorian-era greenhouse still standing in New York, has fallen into disrepair, with peeling paint, rotting wood, crumbling foundations, and missing and broken panes of glass.  A year ago, however, Green-Wood cemetery purchased the greenhouse and is in the process of turning it into a visitors’ center.  And so, this relic now sits behind security gates, waiting to be reborn. 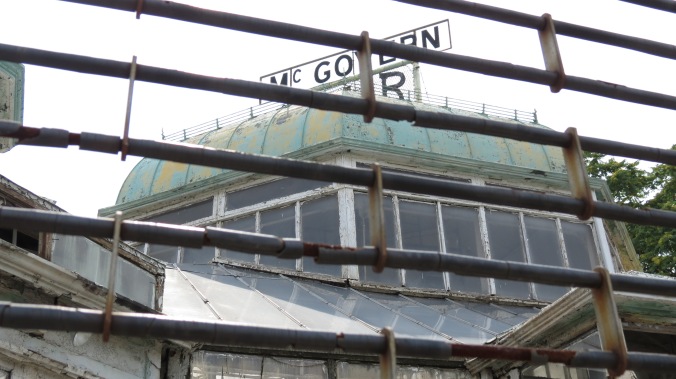 I’m not sure how long this agave has been here, but I like to think that as I look through the hazy glass, I am looking at the ghost of a plant from long ago.

Next Post: The Brooklyn walking tour continues with views from the bridge and a parade of window boxes.