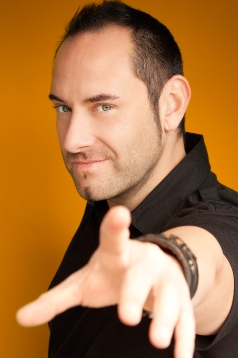 With a name like Dante the Comic, it’s pretty obvious that he’s a funny guy.  The name, though, barely scratches the surface of all that he does on screen, behind the scenes, and in his yard.

Dante first came to national attention on season five of NBC’s “Last Comic Standing,” where he received each audience favorite award and a standing ovation in the semi-finals.  Ever since, awards and honors have continued to roll in, including the grand prize on ABC’s “America’s Funniest People,” the most comedy awards ever presented by BET, and performing for more US troops than anyone since Bob Hope.  And if this isn’t enough, he also writes for E Network’s “Fashion Police,” with Joan Rivers, and hosts a podcast, “Stimulus Package,” which is available through iTunes.

Dante’s newest project is co-starring in the film The InAPPropriate Comedy, slated for a March 22 nationwide release.  Directed by Vince Offer, the Sham Wow guy, this sketch-comedy movie follows the mayhem of a tablet computer fully loaded with offensively funny apps.  Taking part in the irreverent and raunchy humor is Academy Award-winner Adrien Brody, Lindsay Lohan, Michelle Rodriguez, Rob Schneider, and Dante’s girlfriend, Rebekah Kochan, an actress/comedian with her own loyal following.

For gardeners, though, the most impressive piece of Dante’s resume is the work he does in his yard. Dante the Comic, you see, is also Dante the Gardener.

NGDM: I follow you on Twitter, and I have to say, you’re like a Twitter god, tweeting about your comedy appearances, your writing for “Fashion Police” on the E Network, your love and devotion for Rebekah Kochan, your making home-made manicotti, and your podcast.  When you tweeted a photo of your pond, I had to wonder  —  is there anything you can’t do?

DTC: I can’t iron. I’m really shitty at it. I know it’s probably easy, but as much as I travel, I just can’t or won’t do it. I dry clean a lot and I also do my “Squeeze Test” on all clothes before I buy them. If I squeeze them in my hand and there are no wrinkles, I’m happy. Well, as long as it was cute to begin with. 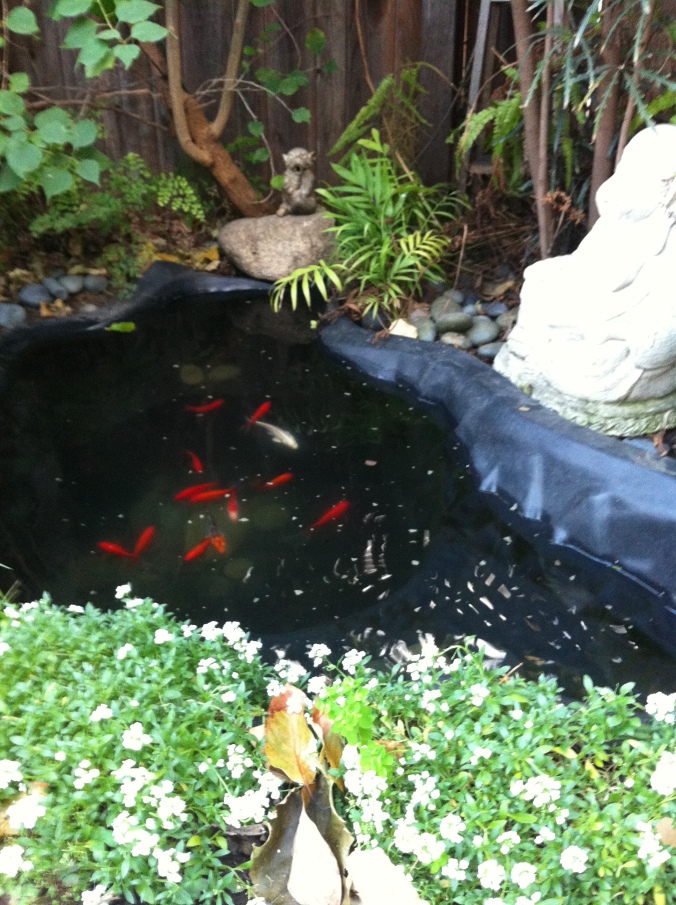 NGDM: So tell me about this pond.  Dimensions?  Fish?  Planting?  Did you do any research on the construction — or did you just wing it?   Would you do anything differently?  Is this just the first of many ponds to come?

DTC: My pond is about 5 feet long, 4 feet across and about 3 feet deep. I actually sprung for the premade pond. However, I spent about 4 hours in the hot sun digging the hole for it to fit in. Next, I worried about the plant life around it. I wanted it to look like Hawaii. I love Hawaii and travel there a lot with Rebekah. I wanted our front yard to feel romantic and relaxing. I put a lot of palms, flowers and ground cover around it. I also added a wood deck leading up to it. And to give it an Asian flair, I bought a very heavy statue of Buddha to watch over the pond. I also sprinkled about 200 polished river stones all around and in the pond. In the pond, I put two baby Red Eared Slider Turtles, four small Koi, six tadpoles and about 15 gold fish. I love the pond. It is very calming.

NGDM: In addition to comedy, you’re a garden guy, as well.  Why do you garden?  Is it in your blood?  Who inspired you to get your hands dirty and start planting?

DTC: I love to garden. It relaxes me. It’s not like I’m a doctor, stock broker or coal miner, but the entertainment business by nature is stressful. My sister Yolee, who passed away about a month ago, would probably be my inspiration. She and her husband Danny own a nursery called Shamrock Gardens in Roseburg, Oregon. Danny can do anything. Gardening is his life. The man knows everything.  A true Yoda of this stuff. Call him at the nursery some time, he will shock you with his knowledge. And he is a great man. 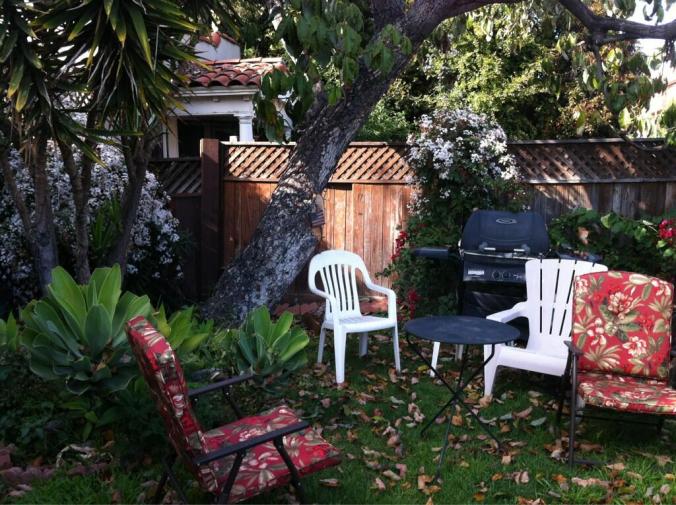 NGDM: One of my favorite photos of you on Twitter is the one of you making manicotti, which I’m assuming, with a name like Dante, is an old family recipe.  What sort of old family recipes do you have for the garden?

DTC: You know I’m not really sure. I just believe in babysitting. If you neglect a garden, just like a child, it will be trouble. Also, coffee grounds do seem to do miracles.

NGDM: And keeping with the recipe theme:  What’s your favorite recipe using something that you’ve grown?

DTC: Mmmmmm, I make an amazing olive bread. It’s so easy, but will be the best bread you ever made. First, go buy those frozen loaves of dough at the grocery store. My store sells it as a three-pack. Let them thaw. Next, I grab two long twigs full of rosemary from my garden and wash them and chop them. Then I add about 20 sliced Kalamata black olives. Squish all of it into the dough. Bake it for 20 minutes on 400 and eat. 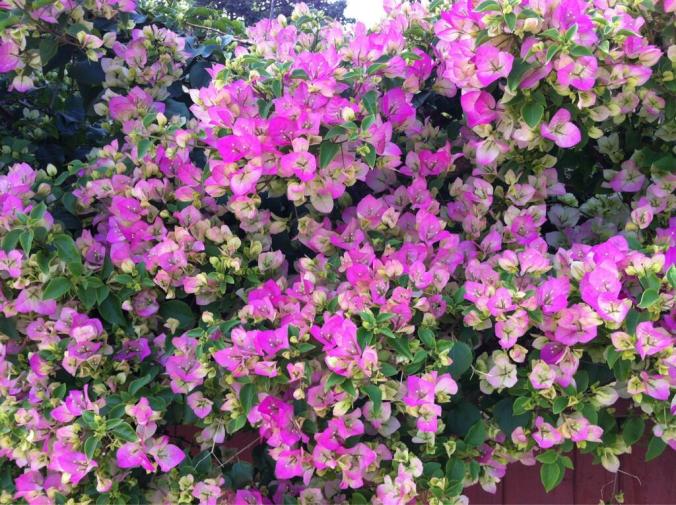 NGDM: When I look at all of the performing arts — and I’m not saying this because it’s you — comedy seems to be the toughest.  To get a large group of people to laugh takes real skill.  Are there any plants/garden situations that present a challenge to you?

DTC: Pot plants are really hard to grow. Way too much needed to make them just right. Not worth my time.

NGDM: Comedians also have to deal with hecklers, more so than other performers — and it’s an art form to handle one.  Who or what are the hecklers in your garden, and how do you handle them?

DTC: There are some squirrels in my yard that don’t seem too afraid to steal and eat my avocados right in front of me. Boo on them. Boo!

NGDM: You must spend a lot of time away from home.  Do you suffer from Garden Separation Anxiety Disorder (G-SAD)?  And what’s it like when you return home to your sanctuary?

DTC: It’s hard to be away from my yard and our veggie garden. No matter who I ask to take care of it, when I get back, things are dead or different. I hate it. I also know my yard, grass, plants and soil so well, that when someone tells me they watered every day, I know if they are lying.

NGDM: I kind of have any issue with HGTV, because they seem to have lost their garden focus.  Have you ever thought about proposing your own gardening/cooking show from an everyday-man’s/comedian’s point of view?

DTC: Yes, actually. I would love to do it. I too have a giant passion for cooking. I love it. Rebekah says every week that I need my own show. Maybe someday, but for right now those things are mine and I just don’t have the time for it.

NGDM: I really wanted to keep this interview focused on you, but I have to ask about Rebekah.  Does she help you in the garden, or does she like to sit back and enjoy the fruits, vegetables, and flowers of your labor?

DTC: She is so involved. She is actually the backbone of the yard. She does all the research about anything and everything we have out there. We have a Meyer lemon tree, for example, and I can’t stand the way those lemons taste. She looked it up and loves how the Meyer lemon is a cross of a lemon and a sweet orange. She also loves that they are from China and more rare than the average lemon. She now uses them every day in her food and drinks. I still hate them. I do the hard labor, but she is not afraid to get her hands dirty. She is out there with me all summer long in our vegetable garden. She may even do more work in it than me. She saves all the digging and lifting for me. She uses the excuse that she likes to see me work hard with my shirt off. Hey, it works for my ego. I’m pretty easy. But Rebekah is also the inspiration for the yard. She is the love of my life. I do things in the yard, to please her and make her proud of me. I also want a pretty, safe and fun yard. My daughter has to play in the yard, so it needs to also be safe. But Rebekah is a party thrower. No one throws more parties in Hollywood than Rebekah and me. So I need to keep it perfect for her. Hey, I also want a nice place to hold her hand and smooch her. 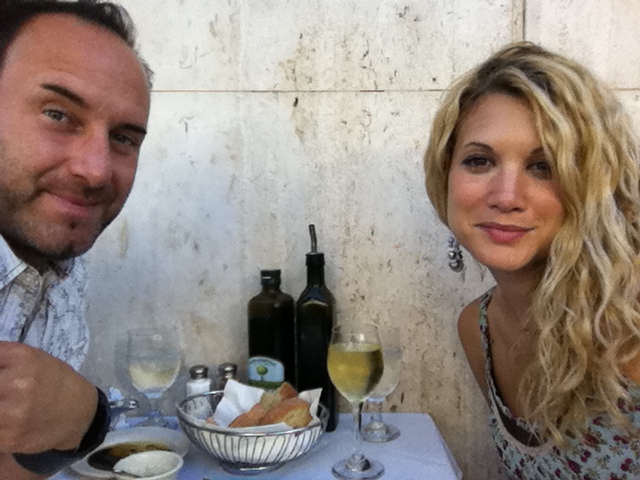 All photos courtesy of Dante.

Note: I’m leaving on a road trip in a few days.  If possible, I will post from my location.  If not, I’ll see you when I get back.  Until then, happy spring and happy gardening — always.