Traditions.  We love them as much as we love ladybugs.  It’s one of the reasons we bake Christmas cookies.  At any other time of year, they seem out of place — but in December, they fit (and taste) just right.

Right now, traditions are everywhere in my day job, where I am not the Nitty Gritty Dirt Man.  I’m a social worker in a suburban high school, and as the school year comes to a close, the traditions are all lined up.  Junior Prom.  Senior Picnic.  Senior Cut Day.  Graduation Count Down.  Senior Banquet.  Senior Prank.

That last item is a tradition that’s met with either anticipation (“I wonder how creative the kids will get this year.”) or dread (“I wonder how destructive the kids will get this year.”).  In my years at the school, each prank has been a little bit of both.  My vote for most creative was the year seniors gathered furniture from around the neighborhood and set it up on the front lawn of the school — open air rooms, so to speak.

Then there was the year students released crickets throughout the building.  My only fond memory of that prank was standing in the carpentry classroom with the lights off and the smell of freshly cut wood in the air.  Stand still, and the cricket song would begin.  It was like camping. 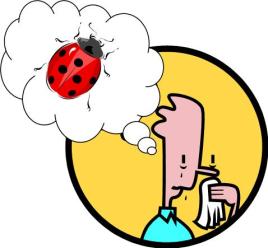 This year, sadly, the senior prank was more like a massacre.  In the middle of the night, three students managed to break into the school and release bags and bags of ladybugs in the indoor commons area of the building.  As teachers arrived, the custodial staff was vacuuming up the bugs in an attempt to not have any sign of the prank visible for when students entered the building.

By the time I arrived, the vacuuming was nearly finished — and when I heard what was vacuumed, I was horrified.  I wished I had arrived earlier — perhaps NGDM could have rushed in to save the day, scooping up ladybugs and releasing them outside.

As the morning ticked by, I was really bothered by the prank on so many levels.

Why ladybugs?  Not only are they symbolic of love and protection, they are perhaps one of the most harmless and most helpful of all bugs.  They’re even the stuff of a nursery rhyme that dates back to medieval England.  Here’s one version:

Your house is on fire and your children all gone,

All except one and that’s little Ann

For she crept under the frying pan.”

If only the three students had remembered anything they learned in Kindergarten — or at least in science class.  If they had, perhaps they would have known that ladybugs are a gardener’s best friend and an aphid’s worst enemy — a truly organic means of eliminating pests from plants.

I’m always amazed at group mentality.  I like to think that maybe one of the three thought this prank was a bad idea, but were unable to speak up and voice concern or even to walk away because of peer pressure, stress that is more a part of our inner rationalizing than outer influences.  It reminds me of those times when adults find themselves in the same situation — kind of like when a group of leaders sit down and come up with legislation — and when I say legislation, I mean the Monsanto Protection Act.

Nevertheless, the legislation has set off my bells and whistles for a number of reasons: a) the lack of any concrete testing on the implications of consuming genetically altered food and its long-term impact on human health, animals, and the environment; b) the reluctance to label products that contain GMOs so consumers can make their own educated decisions about their food; and c) the protection of those companies that produce GMOs from any legal actions, particularly if it should be learned that there are long-term harmful effects.  In essence, once Heston uttered the famous line that Soylent Green is people, we would have no recourse.  The end.  Roll credits.

As the politicians hammered out this legislation, no doubt with the help of well-placed and well-financed lobbyists, I have to wonder if anyone sitting around the table thought of Soylent Green, Charlton Heston’s line, or the concerns outlined above.  And if they did think of these things, did they voice their concern that this was a bad idea — or was he or she bullied into silence by the group or by the inner voice of peer pressure?

The school day progressed and as administration worked tirelessly to identify the three masked students, I took some comfort in noticing small red dots climbing to the top of the school’s walls — ladybug survivors trying to fly away home.  I also felt relief in hearing the comments of other students who questioned the sanity of those who pulled off the prank.  The overall consensus was that it was not only senseless, but also a loss to gardens in the neighborhood surrounding the school — but I wondered if they would have had the courage to speak up if they had known of the prank in advance.

And as students prepared themselves for the next of the school traditions — and some underclassmen began plotting their ideas for their chance at a senior prank — I turned to my lunch.  Eating is one of my most favorite traditions, but was it now altered?  Did I truly know what I was eating?  Did I know what my food choices were doing to me?

If only the Monsanto mess could be vacuumed up as easily and as swiftly as a ladybug prank in a school. 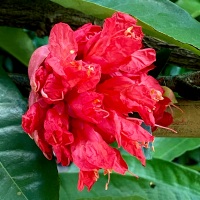