If seeds could talk, I wonder what tales they would tell.

I’m sure they would recite their perfect equation of soil, light, and water for their optimum germination. They wouldn’t even wait for us to ask. They would just offer that info up at the start of the conversation. Seeds are funny that way.

I wonder, though, if they would be willing to share with us their story? That perhaps their great-great-great-great grandfather hitched a ride on Paul Revere’s coat on his famous midnight ride? Or that they, in fact, escaped from a research lab looking to build a better seed?

Recently, I considered these questions when my snowbird neighbor handed me a small plastic baggie, the kind that zips closed. He and his wife had recently returned to South Florida to escape winter in Pennsylvania. He’s also a gardener, often loading up his car at the end of his stay with rooted tropicals for his northern garden.

“I was thinking of starting my tomato seeds down here,” he said, “to get a head start. I thought you might like some.”

Inside the baggie were two carefully folded pieces of paper towel, each labeled in red letters: “Ox” and “Jap.” My neighbor saw my eyebrows arch at the slur. 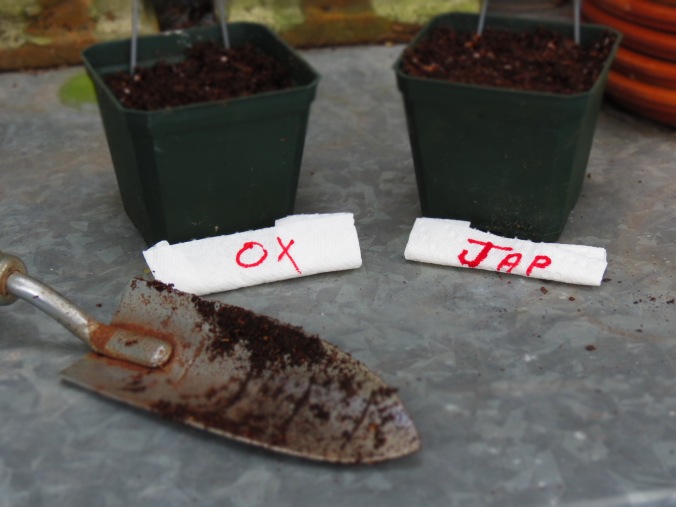 “Oh, geez,” he said. “I just didn’t know what to call them — but they’re the best tomatoes you’ll ever eat. I’ve been growing them for years.”

When he said years, he actually meant decades.

In the closing days of World War II, two American soldiers stationed on opposite sides of the world each tasted what he thought to be the best tomato. They saved the seeds and after the war, returned to the States to restart civilian life. The seeds were planted in each man’s backyard vegetable garden.

Over time, tomatoes and seeds were shared and during the ‘70s “Ox” entered my neighbor’s garden. “Jap” arrived in the early ‘80s.

I have since learned that “Ox” is actually my neighbor’s shorthand for Oxheart, an heirloom tomato with many varieties. The seeds that have been handed down are the descendants of that German tomato.

The other tomato plant is a bit more difficult to identify. The tomato was first tasted in Japan — and all I can tell from the newly sprouted seedlings is that the leaves look nothing like the finely cut leaves of a traditional tomato plant.

Time, I hope, will tell.

For me, though, it’s the story. As my neighbor told the tale, I imagined the journey the seeds — or rather their ancestors — had taken: from war-scarred battlefields to American suburbia, from feeding German and Japanese families to taking center stage at July 4 barbecues.

I know many of us have plants and seeds with a story to tell. Perhaps it’s your great aunt’s African violet that you’ve nursed along or a rooted souvenir from an amazing vacation.  For me, it’s the bleeding heart vine that my now deceased grandfather rooted from a plant I had sent him for Christmas.  When I share my own rooted clippings form the plant he gave me, I make sure to always tell the story.

Bleeding Heart Vine, a plant and story that keeps on giving.

It’s almost as if the story makes the seed/plant more beautiful, more special, more — just more.  The tale is the tapestry of the plant and of us, of who we were and from where we came.  As gardeners, I think we have a duty to not only instruct on the care of plants, to not only share plants, but to make seeds and plants and gardening more real and more human.

Maybe it’s a good thing that seeds can’t talk — that way we can do all the talking for them.

19 thoughts on “Once Upon A Tomato”