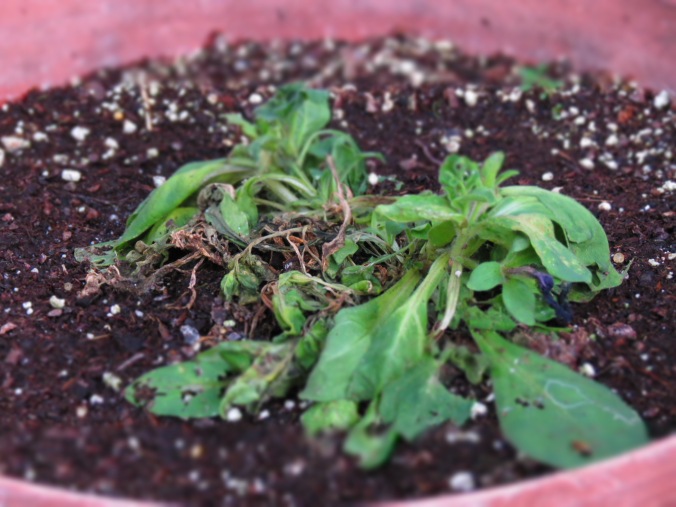 Petunias and I go back. Way back.

Long before I started my own plants in the potting shed in February, petunias were a staple in my parents’ garden. They were often planted in old tires that my father would cut, flip inside out, and paint white — instant, recycled planters.

Petunias were also in the lyric of a song my mother used to sing around the house: “I’m a lonely, little petunia in an onion patch.” I’m not sure if she ever sang the entire song, but the melody was way too chipper for a teary-eyed, solitary petunia in a planting of pungent bulbs.

Nevertheless, when it came time for a Florida garden, I had to decide if I wanted to continue with plants that I used in Zone 7a — or did I want to jump into the Zone 10b pool with both feet.

My first impulse was to go all-tropical — until I walked into a local nursery, filled with annuals for the mild months of a south Florida winter. While many of the tropicals were certainly exotic, there was something comforting — and perhaps even nostalgic — about the flowers I knew from New York.

Besides, I was curious to see how much these plants could tolerate before the Florida heat and humidity did them in. Could it be, I wondered, that plants I had known as annuals could now be perennials?

I began with New Guinea impatiens, now potted on either side of the rear door.

And then geraniums.   I love geraniums. You really can’t go wrong with a geranium.

As I wandered through the rear of the nursery, I noticed a TLC section — and on the shelves were wave petunias for 25 cents. Let me say that again. Twenty-five cents — and all that was needed was water and some — well — some TLC.

Two came home with me that day, and I planted each in its own bowl shaped pot. I added water and kept them in a sheltered place until they were strong enough to leave my plant ICU.

It worked, and the stems and leaves stood taller and healthier and I moved them to a spot near the patio, overlooking the canal and where their little bells could spill over and fill an area around the base of a sundial. It was Long Island gardening in Fort Lauderdale.

Except for the iguanas. 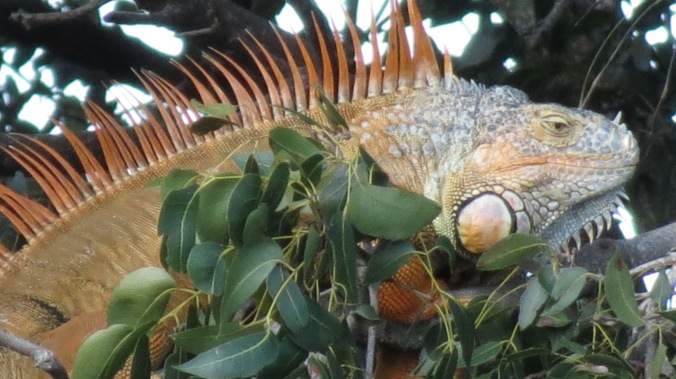 Iguanas run free here. They’re an invasive species, most likely released by people who no longer wanted them as pets. Add a subtropical climate and a never-ending vegetarian food source, and you’ve got a population explosion.

I think of them as my reptilian squirrels.

When I placed my petunias in their new canal-side home, it was as if I had sounded the dinner bell. Salad was now being served. Bored with the abundant weeds in my lawn and the briny vegetation in the canal, the iguanas nibbled and noshed on each and every leaf and stem, reducing my petunias to ragged remains. 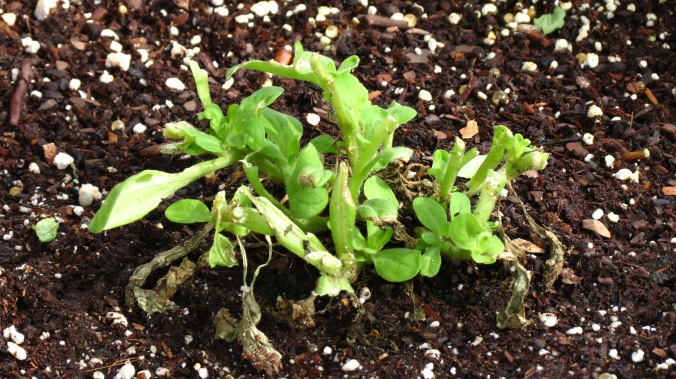 These iguanas, though, were slick — as if they knew they didn’t want to lose their sweet treat. Rather than chew the petunias into oblivion, they left just enough life in the plants for them to rebound. Left alone, the petunias returned once again from the brink. They were full and green and there were even some tightly wrapped blossoms nestled in deep.

I don’t know if it was a smell that only iguanas can sniff or if it was word of mouth among the creatures that live in and around the canal — but those rascally reptiles descended on my petunias as if the plants were an early-bird special.

My lonely, little petunias would have been better off in an onion patch.

I moved the pots back to my ICU, once again nursing them back to horticultural health. Fortunately for the petunias, the iguanas never explore beyond the backyard and the canal. My little plants were safe.

In time, I was I was able to discharge them and their pots to an iguana-free zone, also known as the front yard. Everything seemed fine until one of the petunias began to deteriorate. It was different this time. The leaves and stems were wilting, and the whole plant looked mushy.

At first I thought I had given the plant too much water, then not enough — but neither seemed to make sense. The other petunia looked amazing — and I cared for each equally.

Perhaps, I thought, it was bacterial — something in the pot. And then I wondered if this particular petunia had experienced one too many traumas. That’s what I was pondering as I gave the plant some water and moved it back to the ICU. As I lifted my poor petunia, it was closer to my nose and I smelled that odor.

To make a comparison, I smelled the healthier plant and inhaled the scent of fresh soil. Then back to the sicker plant — not fresh at all. It smelled as if I had traded my backyard iguana problem for a front yard feral cat problem.

There comes a time in every gardener’s life when he or she knows when it’s time to pull the plug on a plant that’s not going to make it. Despite my 25 cents and all of the TLC I could muster, this was that moment for my petunia.

Just like in that song, I now really do have a lonely, little petunia.

I try to keep it less lonely by moving my cheap-but-priceless plant to wherever I happen to be in the yard. It may not be in an onion patch, but it’s certainly under my ever-watchful eyes.

40 thoughts on “The Plight Of My Petunia” 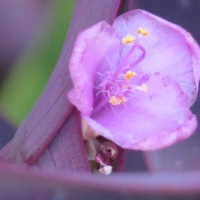 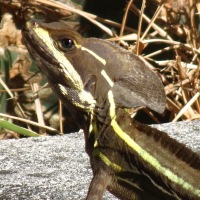