Charles Dickens, in one of literature’s most well-known openings, was referring to life in London and Paris. I like to think, however, he was writing about my tomatoes.

A few months ago, I shared with you the story of some tomato seeds that my snowbird neighbor had given me. They were, he said, descendants of tomatoes sampled by some American GIs in Germany and Japan in the closing days of WWII. They were, he said, the most delicious tomatoes I’d ever taste.

When I planted the seeds, I had dreams of plump, red, mouth-watering, juicy tomatoes for bruschettas and burgers, salads and salsas. I even chose to ignore the warnings of some local gardeners that tomato plants wouldn’t last that long in zone 10, that Florida soil is notoriously non-nutritious.

To continue the Dickens reference, I had great expectations.

Within a week, seeds became seedlings, and I potted these up. The seedlings became plants and I potted up again. And some of these plants eventually had small yellow flowers, a promise of tomatoes to come.

These were the plants I potted up still further, filling large black, nursery-style pots with rich potting soil and organic matter — and I placed them in a sunny locale on the side of the house, between two newly planted orange and lemon trees. This piece of the yard, I envisioned, would be my “farm.”

But something funny happened on the way to the farm. A very warm spring continued to grow warmer, and what should have been the start of the South Florida rainy season became a mix of humid air and no rain. One forecaster even mentioned Saharan dust in the atmosphere. Really. 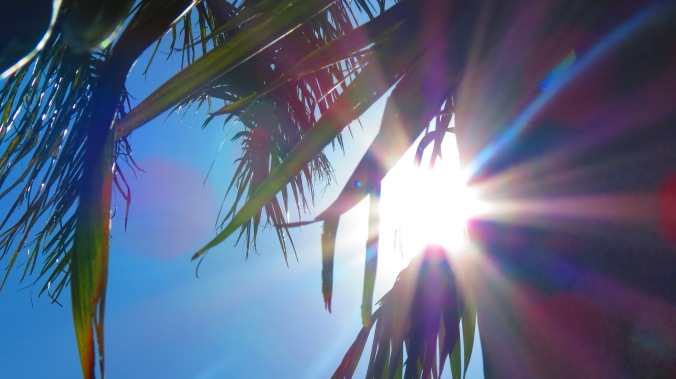 Now, as the summer solstice approaches, it’s capital H-O-T. At midday, the sunlight is actually white and blinding — and one-by-one, my tomato plants have figuratively and literally bitten the dust.

As I walk around the yard, shaded by the brim of my straw hat, two plants remain — withered and brown. One plant has a small excuse for a tomato. I wonder if a tomato can roast on the vine.

In considering all that went wrong, I have come up with two causes.

First, I started the seeds too late in the South Florida season, never taking into account how rapidly temperatures could rise in zone 10. The difference between the seasons here is only a few degrees.

Second, I should never have placed the pots in direct sun. With the combination of high heat and hand watering, I essentially cooked the roots in a sort-of organic soup — not exactly the dish I was hoping for with my home-grown tomatoes.

Even I know when it’s time to put a plant out of its misery. There will be no tomatoes from these plants. Instead, I’ll start seeds in late October or early November for a mid-winter harvest.

In the meantime, a local gardener has come to my rescue, presenting me with two small tomato plants. They’re Everglades tomatoes, a small heirloom variety that can withstand hot days and very warm nights. They have a reputation of being a native variety, but more than likely they came from somewhere in the Caribbean.

“Try these,” said the gardener. “You’ll love them. You will not believe the flavor and the juice that’s packed in these little tomatoes.”

Here we go again, I thought to myself.

I have a friend who reads Dickens’ A Christmas Carol each year, in the days leading up to the holidays. While I admire and applaud his tradition, part of me wonders if the story ever grows old. I mean we have Scrooge, the humbugs, the spirits, and the Christmas morning rebirth. It’s the same story.

I’ve also read some books more than once, and it’s astonishing how each reading brings something new to the mix. Part of it is the author’s skill with language, but the other part of the equation is the reader’s imagination and wanting.

So as this local gardener talked up his tomatoes, he pulled me in — like a well-designed book jacket, blurb, and first sentence. In a flash, I once again imagined bruschettas and burgers, salads and salsas. Then he said the words that all gardeners long to hear.

“These are the best tomatoes you’ll ever taste.”

I accepted his small gift and the promise of nothing but the best of times it held.

I just didn’t have the heart to tell him that I had heard this story before — because this time, I know the ending will be different.

42 thoughts on “A Tale Of Two Tomatoes”