On a recent visit to Tampa/St. Pete, as Joe and I ventured away from the metropolitan area, I was reminded of Robert Frost’s famous poem, “The Road Not Taken” — specifically the closing lines:

Two roads diverged in a wood, and I —

I took the one less traveled by,

And that has made all the difference. 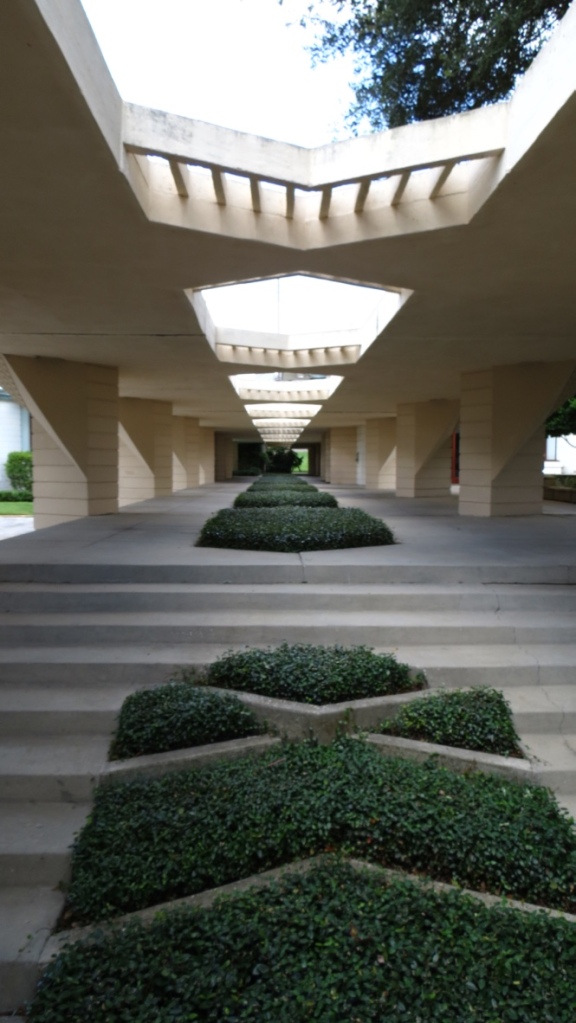 A view of one of the Esplanades.

Those words hold true when traveling to Lakeland, a smallish city between Tampa and Orlando. There, set among a neighborhood of craftsman-style homes and overlooking Lake Hollingsworth, is Florida Southern College — a destination that very few tourists and Floridians seldom visit.

And that’s a shame — because this college, with just 3,000 students, is home to the largest collection of Frank Lloyd Wright-designed buildings.

I wanted a souvenir, but the college wouldn’t let me take the fountain.

The story begins in 1938, when the then-president of the college, Dr. Ludd Spivey, aspired to create a campus grander than the small huddle of brick buildings already there. He dreamt of building the first “American” college, one that did not replicate the ivy-covered institutions that mimicked those in Europe.

Enter Time magazine, or rather its cover with an image of Mr. Wright. Dr. Spivey contacted him and promised to raise the necessary funds if Mr. Wright agreed to build his college.

Mr. Wright toured the site and is said to have remarked that he envisioned buildings “rising out of the ground and into the light, a child of the sun.” 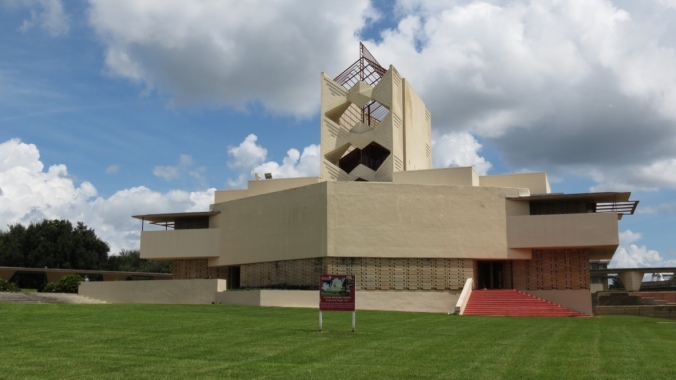 Inside the Annie Pfeiffer Chapel.

A close-up of the detail.

The play of shadow and light and color. 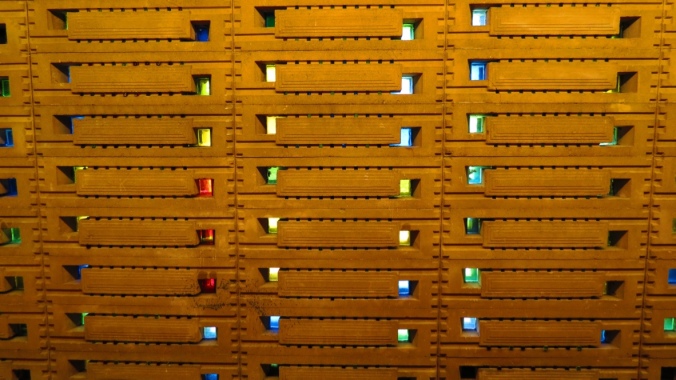 These small colored pieces of glass are used in many of Wright’s buildings on campus.

When I read those words, I immediately thought of the seeds that I — that we — have all planted, and the promise and hope found in each one. How appropriate that these “seeds” were planted to provide an education for so many.

Lab ventilators were not part of Mr. Wright’s original design for the Polk County Science Building. They were added to meet safety standards.

Inside, though, the metalwork seems to blend with the interior styling.

The project began in 1938 and was finished in 1958. Of the 18 structures, twelve were built under the guidance of Mr. Wright.

The altar inside Danforth Chapel.

The organ pipes inside Danforth Chapel.

Strolling around the campus and exploring the buildings, it was easy to understand Mr. Wright’s vision and his use of the landscape’s slopes and curves. In many instances, it did appear as if the buildings had sprouted from where they were planted.

Mr. Wright favored the Ordway Arts Building for its simplicity. 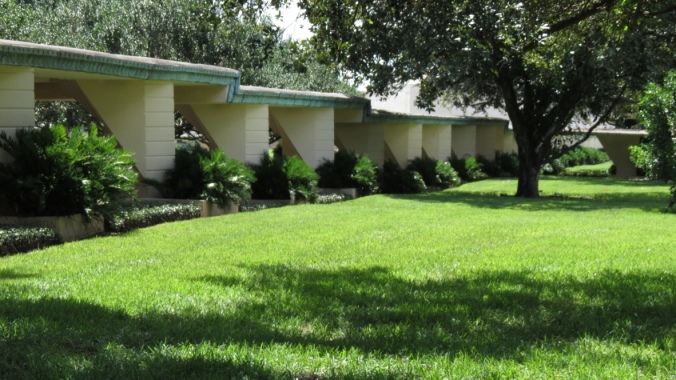 Covered esplanades provide shade for students, staff, and visitors. The supports are said to represent the orange trees once filled the campus.

Like all gardens, though, maintenance and money are on-going issues. Many of the buildings are in various states of disrepair and/or restoration.

The Water Dome — Mr. Wright’s symbol for the fountain of knowledge.

The Water Dome was fully restored in 2007, although it only operates at a fraction of full power to conserve water.

Still, if you’re a fan of architecture or of Frank Lloyd Wright or of finding hidden destinations on the road less traveled, then Florida Southern College is a wonderful surprise — much like the rose at the top of this post, blooming in the shade of campus arbor.