Miracle.  It’s one of those words that’s often tossed about, especially at this time of year.  Just Google the phrase “Christmas miracle” and see what comes up — miracles, it seems, are no longer just on 34th Street.  They are, in fact, everywhere — and on this particular day, they make up a large part of my life.

Today, is my 15th birthday.  Geez, it was only a few days ago I was 12 — or, rather, being an uncle and having to purchase a Christmas gift for my 12-year-old niece.

Never mind, though — today I am celebrating the miracle of being 15.

December 12, 1997, was like many of those Long Island winter days — not sure if it wanted to be cold enough to snow or warm enough to rain.  The result was a gray, damp, slushy mix that left a coating of black ice on the pavement — and this was my commute home.

At the point where one highway curved northward and merged with another highway, my Geo Tracker . . . it’s here that I have no memory of what happened.  The events are pieced together from witness statements.

My Geo Tracker decided to skid from the left lane to the right lane, and then back toward the left.  It hit the curb and became airborne, tumbling over the shrubs and trees that were in the median, the soft top of the car coming undone.  Eventually, my car landed on the southbound lanes, at first on the driver’s side and then bouncing back onto its wheels.

Traffic came to a stop.  One driver, the first person to reach me, was on his way to his church Christmas tree sale with $3,000 in his car.  He has since told me that he found me tangled in my seatbelt.  He didn’t see any bleeding, but he did note that I kept repeating the same question, “What happened?”  He figured I had a head injury — and he should know.  He was an off-duty OR nurse.

The second person to stop was a police officer, who radioed for a helicopter to airlift me to the hospital — but the helicopter was busy on other calls.  An ambulance arrived, but the ambulance was strictly for transport and the crew was not equipped to deal with my injury.

The nurse, leaving his car unlocked and with $3,000 in it, accompanied me in the ambulance and worked to stabilize me.  (By the way, when he returned to his car, the money was still there.)

Before the doors of the ambulance closed, there was one other person on the scene.  A former student of mine, who happened to be driving southbound that day, recognized me.  Feeling helpless and not knowing what to do, he gathered my briefcase and personal belongings and put them in the ambulance.  That was how the hospital was able to contact my family.

At the hospital, I have very vague memories.  I remember asking the doctor if I was going to die — and he said no.  And I remember telling myself, in my head, to keep listening to the muffled noises around me –as long as I could hear, I thought, it meant I was still alive.

I underwent surgery for a fractured skull.  Actually, there were two fractures: one above my right eye, and the other along the right side of my head, most likely caused by my brain hitting the inside of my skull after the car came to an abrupt stop.  It was under that part of my skull that a clot, an epidural hematoma, had to be removed.  My head was then closed with some metal plates and 42 staples.

Afterwards, many of the nurses and interns had asked Joe how did I score two of the hospital’s most well-respected surgeons.  They both just happened to be on duty that night.

You might be wondering, however, what this all has to do with gardening.  Well, gardening in and of itself is a bit of a miracle — the process of planting and nurturing and growing.  And there is also this picture, taken a few months after the accident. 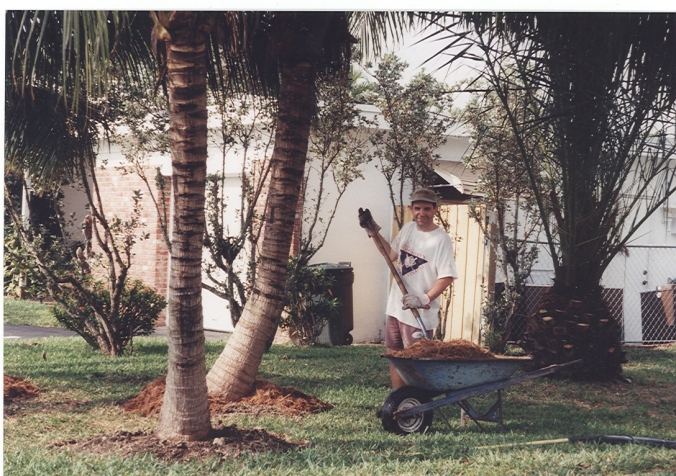 While I was in intensive care, there were many days when visitors weren’t about that I was able to do some serious thinking.  I had just suffered a serious head injury — and by all accounts, there was a very real possibility that gardening may no longer be an activity for me.  But I was awake.  I was alive.  And there was no permanent brain damage — no comments, please.

So as I spread mulch under a palm tree in South Florida, I truly appreciated the miracles I had just experienced.  The warmth of the sun on my skin, the smell of the mulch, the sensation of gardening, the movement of my limbs — all things to celebrate.

Today, as I turn 15, I continue to marvel at the whole experience with wonder and awe.  I mean, if this had been a movie or a book, I would be the first to doubt the chances of all of these people all being in a specific place at a specific moment in time.  But it did happen.  A coincidence?  Divine intervention?  A miracle?  Many miracles?

It’s kind of like these water globes, which were recently given to me as a gift by friends Catherine and Robert.  The idea is to fill the globe with water and then stick the end into a flowerpot, thereby watering your potted plant for up to two weeks.

Surely they work because of some scientific principle, or maybe a stroke of creative genius, or, perhaps, even magic.  But somewhere in the swirls of colored glass, there is the spark of a miracle — no matter if it’s the theory behind the science or the artistry of the glass blower.  It’s still a miracle.  Don’t you think?

Fifteen years later, I am still quite aware of what happened on the right side of my head.  Under my hairline is a very thin scar that looks like a question mark as it curves from the edge of my forehead toward the back of my head and around my right ear.  There are also a few bumps.

Recently, I’ve felt some pain near one of the bumps near my right temple — a sort of sharp twinge, and definitely noticeable.  I sought out the original neurosurgeon — the one and only person who actually saw and touched my brain — for some answers.  He explained that it was common for things to shift, but to be on the safe side, I should undergo some tests.  Here is a close-up.

Despite what many people think, I clearly do not have flowers on the brain.  Although the surgeon said there was no cause for alarm, I needed a diagnosis.  So, I gave myself one.  In laymen’s terms, I have a screw loose.

But many of you probably already knew that.

30 thoughts on “My Miracle Before Christmas” 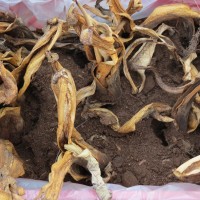 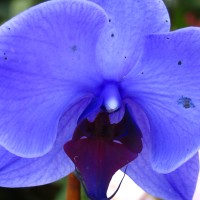